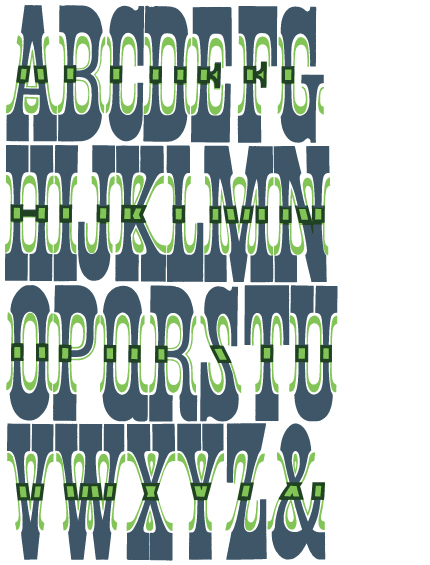 This type measures 34 line in size and was produced with the end-cut method. Neither of the type blocks have a manufacturer’s stamp.

This face was first shown as wood type by William H. Page in his 1870  Specimens of Wood Type.

Celtic was not shown chromatically in  American Wood Type  but was shown in the folio on page 74 spelling out “Rob Roy” in two colors on the top of specimen sheet.

This cut is the Page cut.

This design was first shown chromatically (2 colors) on the cover of Page’s 1870 Specimens of Wood Type.  It was also shown in Page’s 1874 Specimens of Chromatic Wood Type and Borders  in two colors and was marked “Patented March 15, 1870.” When the two blocks were used together the resulting lock-up was named Chromatic Celtic Ornamented. Page also offered a Celtic Ornamented, first shown as wood type in 1870 as well, to be used as a one color version of this two part design.

There is no indication in the specimen book record that Hamilton offered Celtic as a two-color chromatic design.