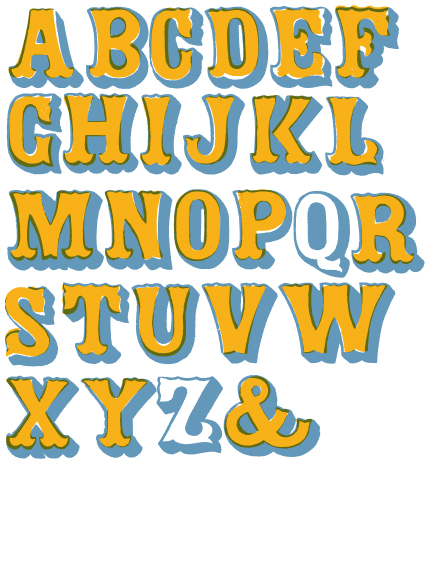 This type measures 7 line in size and was produced with the end-cut method. Neither of the type blocks have a manufacturer’s stamp.

An ornamented variation of this chromatic pair was first shown as wood type by Darius Wells and E.R. Webb in William Hagars’s 1854 Specimen of Printing type, Ornaments Borders & ect.

Doric was not shown chromatically in  American Wood Type  or in the folio.

Wells Doric and  Doric Shade No 1

This cut has not yet been matched to a manufacturer.

An ornamented variation of this design was first shown chromatically (2 colors) in William Hagars’s 1854 Specimen of Printing Type, Ornaments Borders & etc.  It was also shown as a 3 color chromatic by J.G. Cooley in his c.1859 Specimens of Wood Type.

In American Wood Type Kelly labeled this type Doric Chromatic and stated that this design was “[f]irst shown in the 1850’s as wood type. Design was imported from Europe, likely France, during the 1840’s.”

Cooley, Hamilton and Page all showed a range of ornamented Doric shaded faces, though neither Cooley nor Hamilton ever listed or showed plain or non-ornamented shaded faces. Page shows the solid Doric in a 1868 advertisement in The Chicago Specimen  as the inside type form of an “ornamented letter for two color” printing.