Prior to 1800, nearly all European and American letterpress printing was done with metal type. Typefounders could rapidly cast thousands of identical lead-alloy sorts (glyphs or characters) using a type mold, which was a very effective technology for casting type at small point sizes. However, larger sorts took a long time to cool in the type mold, which slowed down the pace of production. Thus English typefounder Thomas Cotterell turned to sand-casting to produce the unprecedentedly large, two-inch-high letters that he began selling c.1765.

Although Cotterell’s typeface was enormous for its time, the same typefaces that looked very large when printed in books or on handbills were not large enough to suit the needs of nineteenth-century manufacturers, entertainers, retailers, and governments. These groups increasingly used posted notices (aka posters) to communicate with literate, urban mass audiences. To catch the eyes of passersby walking or riding through busy city streets, printers needed type even larger than Cottrell’s1.

In the 1820s, hand-cut wood type provided a solution, but a slow and therefore relatively expensive one. However, Darius Wells’s invention of the lateral router in 1827—which his fellow American William Leavenworth paired with a pantograph in 1834—made it possible for the first time to quickly resize and replicate type in wood. The eclecticism and exuberance typical of mid-nineteenth-century posters and handbills is due in large part to the availability and affordability of so many styles and sizes of wood type. 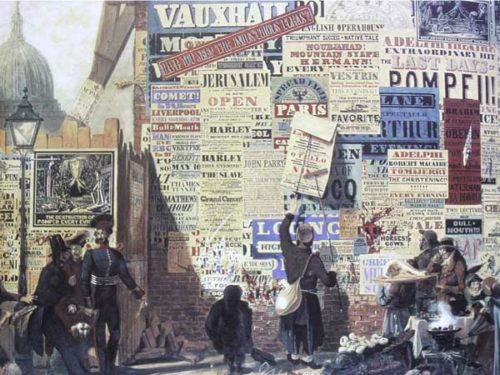